During WWII my home town, Oak Ridge Tennessee, was created from scratch as part of the Manhattan project. The little city was protected by fences, guard houses, and security gates. On one end of town, across the railroad tracks, was the tiny community of Elza . A guard house and security gate was installed and the area became known as "Elza Gate." Several years after the end of WWII, Oak Ridge was opened up, and the gates were removed. Elza Gate became a mixed community of a few homes, apartments, and businesses. Rents were typically much lower than in nearby Oak Ridge.

After returning from my adventures at Celestial Holograms in California, I set up a small holographic studio in Elza Gate around 1976. My brother Joel and I actually lived in the studio which we named "Baltic" after the low rent property on the Monopoly board. 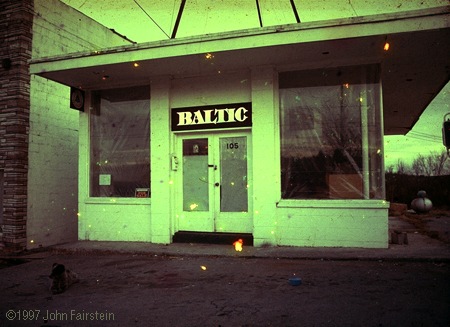 The studio was equipped with a home built laser and sand box optics table. Not many holograms were made on the table, most of my effort went into marketing the then new multiplex holograms coming out of the Multiplex Company in the Mission District of San Francisco. I built a 4 foot diameter rotating turntable and acquired an Bell & Howell Eyemo 35mm camera to shoot footage for multiplex holograms.

About this time I met up with Ed Walsky and Phil Kreger, two very talented exhibit designers doing freelance work for the Museum of Atomic Energy in Oak Ridge. Walsky had actually headed the Museum for many years, but had semi-retired due to health. The three of us teamed up to pitch using holography at the Museum as part of their exhibit program. Kreger and I made a trip out to the Multiplex Company where we discussed our business with Rufus Friedman and bought some sample holograms. After returning to Baltic, Kreger designed some attractive displays, and we made a comprehensive presentation to the Museum staff. They liked what they saw and asked us for a quote. After about a month waiting for their purchase order, I discovered that Rufus had sold them the holograms direct, and the Museum craft people were building their own displays based on our designs. I dropped Multiplex Company like a hot potato, and never set foot again in the Museum¹.

A few months later, Lee Lacey came down from Detroit to visit Baltic, and our discussions led to my moving to Chicago to help him set up the Holographic Arts Company. Kreger became the exhibit designer at the Tennessee State Museum in Nashville. Ed Walsky passed away in the early 80's.

¹Years later the Museum reorganized under a new name and moved to a new location. The new facility, exhibits, and staff are first rate.